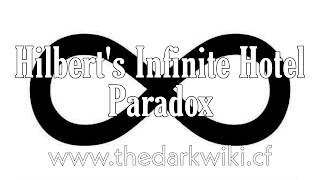 In the 1920's, the German mathematician David Hilbert devised a famous thought experiment to show us just how hard it is to wrap our minds around the concept of infinity.

The process can be repeated for any finite number of new guests. If, say, a tour bus unloads 40 new people looking for rooms, then every existing guest just moves from room number "n" to room number "n+40", thus, opening up the first 40 rooms.

Everyone's happy and the hotel's business is booming more than ever. Well, actually, it is booming exactly the same amount as ever, banking an infinite number of dollars a night. Word spreads about this incredible hotel. People pour in from far and wide.

One night, the unthinkable happens. The night manager looks outside and sees an infinite line of infinitely large buses, each with a countably infinite number of passengers. What can he do? If he cannot find rooms for them, the hotel will lose out on an infinite amount of money, and he will surely lose his job.

The night manager then takes the people on the first of the infinite buses and assigns them to the room number of the next prime, 3, raised to the power of their seat number on the bus. So, the person in seat number 7 on the first bus goes to room number 3^7 or room number 2,187. This continues for all of the first bus. The passengers on the second bus are assigned powers of the next prime, 5. The following bus, powers of 7. Each bus follows: powers of 11, powers of 13, powers of 17, etc. Since each of these numbers only has 1 and the natural number powers of their prime number base as factors, there are no overlapping room numbers. All the buses' passengers fan out into rooms using unique room-assignment schemes based on unique prime numbers.

In this way, the night manager can accommodate every passenger on every bus. Although, there will be many rooms that go unfilled, like room 6, since 6 is not a power of any prime number. Luckily, his bosses weren't very good in math, so his job is safe.

The night manager's strategies are only possible because while the Infinite Hotel is certainly a logistical nightmare, it only deals with the lowest level of infinity, mainly, the countable infinity of the natural numbers, 1, 2, 3, 4, and so on. Georg Cantor called this level of infinity aleph-zero. We use natural numbers for the room numbers as well as the seat numbers on the buses.

If we were dealing with higher orders of infinity, such as that of the real numbers, these structured strategies would no longer be possible as we have no way to systematically include every number. The Real Number Infinite Hotel has negative number rooms in the basement, fractional rooms, so the guy in room 1/2 always suspects he has less room than the guy in room 1. Square root rooms, like room radical 2, and room pi, where the guests expect free dessert. What self-respecting night manager would ever want to work there even for an infinite salary?

But over at Hilbert's Infinite Hotel, where there's never any vacancy and always room for more, the scenarios faced by the ever-diligent and maybe too hospitable night manager serve to remind us of just how hard it is for our relatively finite minds to grasp a concept as large as infinity. Maybe you can help tackle these problems after a good night's sleep. But honestly, we might need you to change rooms at 2 a.m.

How does Artificial Intelligence learn?