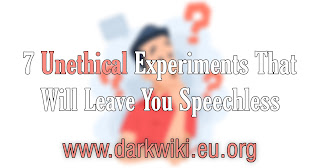 Throughout the history of scientific research, there have been a number of unethical experiments that have shocked and appalled the public. From the Tuskegee syphilis study, in which African American men with syphilis were left untreated and studied for decades to observe the progression of the disease, to the Guatemala syphilis experiments, in which subjects were intentionally infected with syphilis without their knowledge or consent, these experiments represent some of the darkest moments in the history of science. But how did these unethical experiments come to be, and what were the consequences for the subjects and the scientific community as a whole? In this blog post, we'll take a closer look at eight unethical experiments that have made headlines throughout history, and explore the ethical issues and lessons that we can learn from them.

The Tuskegee syphilis study was a clinical study conducted by the U.S. Public Health Service (PHS) between 1932 and 1972 in Tuskegee, Alabama. The study was designed to examine the natural course of untreated syphilis in rural African American men who had the disease.
The study enrolled 600 African American men, 399 of whom had syphilis and 201 of whom were healthy controls. The men were told that they were being treated for "bad blood," a local term for various illnesses, including syphilis, anemia, and fatigue. However, they were not actually given adequate treatment for their syphilis.
Instead, the PHS researchers withheld treatment and allowed the men's syphilis to progress, even as penicillin became the standard of care for the disease in the 1940s. The researchers also lied to the men about their true medical condition and prevented them from seeking treatment elsewhere.
The Tuskegee syphilis study is now widely regarded as a grave injustice and a violation of the men's human rights. The study was finally terminated in 1972, after it was exposed by a whistleblower and widely publicized in the media. The U.S. government formally apologized for the study in 1997, and in 1999, the U.S. Congress passed legislation providing compensation to the surviving study participants and their families.
The Tuskegee syphilis study remains a powerful reminder of the need for ethical research practices and the importance of informed consent in medical research. It also highlights the long history of systemic racism and discrimination against African Americans in the United States.

The Stanford prison experiment was a psychological study conducted in 1971 by Philip Zimbardo and his colleagues at Stanford University. The study was designed to investigate the psychological effects of power and the roles people play in social situations.
In the study, 24 male college students were randomly assigned to be either guards or prisoners in a simulated prison environment at Stanford University. The "prisoners" were arrested at their homes, "booked" at a police station, and then transported to the "prison," where they were stripped, searched, and given prison uniforms to wear. The "guards" were given uniforms and told to maintain order in the prison.
The study was intended to last for two weeks, but it was terminated after just six days due to the extreme psychological distress experienced by the prisoners and the abusive behavior exhibited by the guards.
The Stanford prison experiment is now widely regarded as a classic study in psychology, and it has been the subject of numerous books, articles, and documentaries. It is often cited as evidence of the power of social roles and the influence of the situation on behavior.
However, the study has also been the subject of much criticism and controversy, particularly in regards to its ethical implications and the validity of its conclusions. Critics have argued that the study was unethical, as the participants were subjected to extreme stress and psychological trauma, and that the results cannot be generalized to real-world prison conditions.
Despite these criticisms, the Stanford prison experiment remains a significant and influential study in the field of psychology, and it continues to be widely discussed and debated by scholars and students of psychology and other disciplines.

The Monster Study was a controversial psychological experiment conducted in 1939 by Wendell Johnson and his graduate student Mary Tudor at the University of Iowa. The study was designed to investigate the role of positive and negative reinforcement in language development in children.
In the study, 22 orphan children between the ages of 6 and 12 were selected to participate. Half of the children were designated as the "experimental group" and were given negative feedback and criticism for any mistakes they made in their speech. The other half were designated as the "control group" and were given positive feedback and encouragement for their speech.
The children in the experimental group were subjected to a series of speech therapy sessions that lasted for several months. During these sessions, they were told that they were "stutterers" and that they had a problem with their speech. As a result, many of the children in the experimental group developed speech problems and stuttered, even though they had previously spoken normally.
The Monster Study has been widely criticized for its unethical methods and for the harm it caused to the children who participated in the study. The study was never published, and it was not widely known until it was uncovered by a journalist in 2001. In 2007, the University of Iowa formally apologized for the study and provided compensation to the surviving participants and their families.
The Monster Study is a reminder of the need for ethical research practices and the importance of obtaining informed consent from research participants. It also highlights the dangers of using vulnerable populations, such as children, in research and the potential harm that can result from psychological experimentation.

MKUltra was the code name for a series of covert, illegal experiments on human subjects that were conducted by the U.S. Central Intelligence Agency (CIA) in the 1950s and 1960s. The experiments were designed to investigate the use of drugs and other methods for mind control and behavior modification.
The MKUltra experiments involved the administration of drugs, such as LSD and mescaline, to unwitting subjects, including prisoners, military personnel, and mental patients. The subjects were often given the drugs without their knowledge or consent and were subjected to various forms of psychological manipulation and abuse.
The MKUltra experiments were part of a larger CIA program called Project MKUltra, which was created in 1953 in response to perceived threats from the Soviet Union and other foreign powers. The program was terminated in 1973, but many of the details of the experiments were not made public until decades later, when documents related to the program were declassified.
The MKUltra experiments are now widely regarded as a grave injustice and a violation of the subjects' human rights. The U.S. government has never formally apologized for the experiments, and many of the subjects have never received compensation or acknowledgement for the harm they suffered.
The MKUltra experiments are a reminder of the dangers of government-sponsored experimentation on human subjects and the importance of ethical research practices. They also highlight the need for oversight and transparency in government programs and the importance of protecting the rights of individuals in research.

The Guatemala syphilis experiments were a series of unethical and unethical medical experiments conducted in Guatemala from 1946 to 1948 by U.S. government researchers. The experiments were designed to test the effectiveness of penicillin in preventing and treating sexually transmitted infections, including syphilis and gonorrhea.
In the experiments, more than 5,500 Guatemalan prisoners, soldiers, and mental patients were intentionally infected with syphilis, gonorrhea, and other sexually transmitted diseases. The subjects were not informed of the nature of the experiments or the risks involved, and they were not given proper treatment or follow-up care. Many of the subjects suffered serious health consequences as a result of the experiments, including blindness, paralysis, and death.
The Guatemala syphilis experiments were uncovered in 2010, when a researcher discovered previously classified documents related to the experiments in the U.S. National Archives. The revelations sparked widespread outrage and condemnation from the international community and led to a formal apology from the U.S. government in 2011.
The Guatemala syphilis experiments are a grave injustice and a violation of the subjects' human rights. They are a reminder of the need for ethical research practices and the importance of informed consent in medical research. They also highlight the dangers of using vulnerable populations, such as prisoners and mental patients, in research and the potential harm that can result from unethical experimentation.

The Aversion Project was a controversial program conducted by the South African military and the country's Department of Health from the 1960s to the early 1990s. The project was designed to "cure" homosexual and anti-apartheid activists of their "deviant" behaviors through the use of electroshock therapy, hormonal treatment, and other methods of behavioral modification.
The Aversion Project was part of a larger system of state-sponsored repression and discrimination against LGBTQ+ individuals and political activists in South Africa during the apartheid era. Many of the subjects of the project were arrested, detained, and tortured by the government, and they were subjected to a range of abuses, including electric shock therapy, chemical castration, and other forms of physical and psychological torture.
The Aversion Project was eventually exposed and condemned by human rights organizations and the international community, and it was officially terminated in 1991. In 2003, the South African government issued a formal apology for the project and established a Truth and Reconciliation Commission to investigate and document the abuses that took place during the apartheid era.
The Aversion Project is a reminder of the dangers of state-sponsored repression and discrimination and the importance of protecting the rights of marginalized and vulnerable groups. It also highlights the need for accountability and justice for victims of human rights abuses.

As we have seen, the history of science is dotted with a number of unethical experiments that have shocked and appalled the public. From the Tuskegee syphilis study to the Aversion Project, these experiments represent some of the darkest moments in the history of science, and have raised important ethical concerns about the conduct of scientific research.
But what can we learn from these unethical experiments? While it may be tempting to write them off as isolated incidents that have no bearing on modern science, it is important to recognize that these experiments represent a failure of the scientific community to uphold ethical standards and to prioritize the well-being and autonomy of research subjects. By exploring the ethical issues and lessons that we can learn from these experiments, we can work to ensure that such unethical practices are not repeated in the future.
Some key ethical issues that are highlighted by these unethical experiments include the importance of informed consent, the need to respect the autonomy and dignity of research subjects, and the obligation to minimize harm and maximize benefit in scientific research. By reflecting on these issues and incorporating them into our research practices, we can work to ensure that science is conducted in an ethical and responsible manner.
I am a freelance Web developer who loves to create great websites using HTML, CSS, JavaScript, JQuery, Bootstrap CSS Framework, etc. My expertise lies in Website Designing, Blogging, HTML, CSS, etc. …