What is Déjà vu? 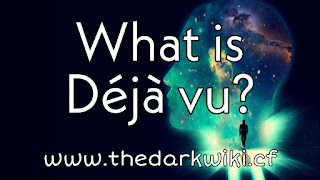 What is it, and why does it occur? You know, those moments where the current situation feels like it's happened before? You're certain it has, but you don't know when, or how it became so familiar. It's difficult to scientifically study déjà vu because there's no reliable way to cause it to happen in people's heads in a laboratory.

But here's what we do know: humans don't seem to experience déjà vu until they're at least 8 or 9 years old. It's most frequent in your teens and twenties, and then tapers off as you get older. So, it might have something to do with brain development.

Now, like a stomach ache, déjà vu may be a symptom with many possible causes. A lot of the popular theories about what causes it involve a disconnect that may be occurring between the deep structures of the brain that process our experiences unconsciously, and the parts of the brain that are conscious of what they experience, process it, and then tell us what we're seeing.

For the sake of simplicity, let's begin with the visual system. Now, the brain sits in your head and your eyeballs are seeing things, sending that signal to the back of the brain, the Occipital lobe, where visual cortex is. That's where the image is processed and we become aware of what we're seeing.

But visual cortex isn't the first stop that information makes. Instead, we know that it stops in lots of other places. For instance, the amygdala (where it may be processed at an involuntary emotional level) and the tectum. It's involved in preliminary visual processing and helps control eye movements.

Now, that fact is incredibly important because what it means is that people with blindness caused by brain damage to the visual cortex cannot see anything. They don't report seeing or recognizing anything; however, the other preliminary parts of the brain that get that message are still healthy, and so, despite being legally blind, these people exhibit what is known as blindsight. They can defy all odds and avoid an obstacle course on the ground. They can also be presented faces showing joy, or anxiety and fear, and feel, without knowing why, at all, on Earth they feel that way, a similar emotion.

So, a lot is going on when we look at things, and if those preliminary structures in the vision system allow certain blind people to be oddly and unconsciously aware of what they're looking at, we may have the ingredients we need for this disconnect.

Think of it this way. If I experience event A and then B and then C, and the inner parts of my brain commit it to memory and generate an emotional response, but then, a fraction of a second later, out-of-sync, my visual cortex finally gets around to telling me, the conscious aware part of my brain, what I'm seeing. It will say "Ok guys, we're looking at A, and then B, and then..." and then the brain says "Whoa, whoa, whoa, wait, wait, and then C, right? That's already happened I thought?..." and that may be déjà vu.

But what could cause these processes, dealing with the same information, to get temporarily out-of-sync like that? Well, it's probably a neurological abnormality, possibly an epileptic episode where neurons all fire in sync. We also know that patients who experience chronic and persistent déjà vu tend to have brain damage in the temporal lobes of their brain - these lobes on either side. Well that sounds kinda bad, right? I mean, when I experience déjà vu, should I run to the doctor right away?

Well, not at all. In fact, minor epileptic events are quite common. You've probably experienced a similar phenomenon known as a Hypnagogic Jerk. That's a fancy name for what occurs when you're about to fall asleep and then all of the sudden you feel like you're falling, or that you tripped, and your body jolts itself awake. What's going on there is that as you fall asleep your muscles relax, and some part of your brain that's still awake notices that, and feels like you're no longer supported - you must be falling - and it sends out a huge signal that causes all of your muscles to twitch, waking you up.

Déjà vu is not the only "vu" out there. There's also something known as Presque vu, or "tip of the tongue," and this is what happens when you're familiar with something, you know you know it, but, for the life of you, at that moment, you cannot recall it. It's like "what's that actor's name from that movie? I've seen it 18 times, how can I not remember it? Wow." One explanation of how that happens is that other words similar to the target word are being remembered, and to help you out your brain is actively blocking other stuff around it, including the word you're actually looking for.

Now, this explanation is really nice 'cause it might actually explain why Presque vu has a shared or social aspect. Even a bunch of people in a group, all with separate brains, if they're given the same "blocking words" that are related, no one in the group can come up with the name until the subject is changed and those words are no longer blocked, and then all the sudden someone goes "Oh, Robert Downey, that's who it was. Yup, there you go."

Ok, now finally, Jamais vu. This is when something that you know, something that you're familiar with, all of a sudden seems brand new and bizarre. Schizophrenic patients will sometimes see people they know and insist that it's not the person they know. Instead, it's an imposter.

Well, scientists believe that happens because continuing to excite the neurons responsible for that word causes them to become inhibited, and further use is less intense. It is just crazy to think that there is so much out there in the world, in the universe, that we don't know, that we don't understand, that we haven't yet discovered. But yet that very feeling of familiarity for what we do know can't always be trusted.