How fast are you moving right now? 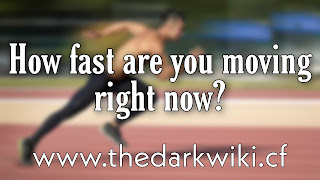 When Mission Control tells astronauts how fast they're going, there's always an assumed standard of rest. At the start of the voyage, speeds are given relative to the launchpad. But later, when the launchpad is just one more arbritrary place down there on Earth's spinning surface, speeds are given relative to the idealized, non-spinning pinpoint center of Earth.

On their way to the Moon, Apollo astronauts had a hard time answering the question, "How fast are you moving?" Speed away from Earth was one thing, and speed toward the Moon was quite another.

That's because the Earth and the Moon move relative to one another. Ah, of course! Speed is a relative quantity.

When Captain Kirk ask Lieutenant Sulu if the Starship Enterprise has reached a speed of warp 7, Sulu should reply, "Relative to what, Captain?" Such a sassy reply may get subordinate Starfleet officers in trouble, but it is the only good answer to the question, "How fast are you moving?" This is basic relatively talking.

Not fancy Einsteinian relativity, but good old fashioned (and still correct) Galilean relativity. Galileo seems to have been the first person to realise that there is no such thing as an absolute speed.

Speeds are relative. This means that speeds only have meaning when they are referred to a reference frame. Presumably that reference frame is itself at rest. But then we have to ask again, "At rest relative to what?" Because even the concept of rest has lost any hint of absolute meaning. Speed is relative, and rest is relative.

When we furrow a brow and ask, "But how fast is Earth really moving?" We imagine Spaceship Earth plowing through the ocean of space as it orbits the Sun. But space is not an ocean. It has no substance as water does. Space is not a thing; Space is nothing. You can move between two points in space, say between Earth and Mars, but you can't move through space. There's nothing to move through. It's like trying to say how much a hole weighs. A hole weighs exactly nothing because a hole is nothing. It's a void, and so is space.

To move relative to nothing is meaningless. The concepts of speed and of rest have only relative meaning. They are absolutely meaningless. They mean something only with respect to arbitrarily chosen, artificial frames of reference.

If, someday, you are buckled into your spaceship, and you see from the side window, say, a space station whizz by at constant speed, there is no way to know which of you is really moving.

Neither of you is really moving because there is no deep reality about constant speed. Constant speed in a straight line has only relative meaning, a kind of relative reality. Does this mean that all motion is relative?

Calling something absolute in science means that arbitrary standards are not used in its measurement. It is unambiguously measurable.

There's something absolutely real about changes in speed. The same goes for rotation. If your spaceship is spinning, you can feel it, and your ship's sensors can measure it. The space station outside may seem to be going around you, but it is you who feels queasy, not the folks in the space station. You are really spinning, and they really are not. There's something absolutely real about rotation.

So, some motions are relative, and some are not. There is no deep reality about constant speed, but changes in speed are deeply real, and so are rotations. We have to be thoughtful in our analysis of everyday experience in order to identify what is deeply real.

Since we can be fooled by perceptions as basic as speed, maybe every perception deserves careful scrutiny. This is what inspired Einstein to his incredible insights about the speed of light and forward time travel. Knowing how to identify what is deeply real is tough and important work.

If a police officer ever pulls you over for speeding and asks, "Do you know how fast you were going?" an insightful, though perhaps unwise, reply would be, "Relative to what?" And then, as you sit in the backseat of the police car and feel it accelerate toward jail, you can add, "But some things are absolute!"