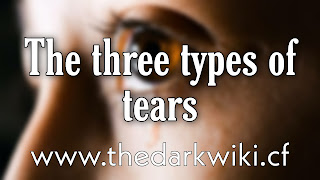 Our story is about a girl named Iris. Iris is very sensitive. So much that she is always in tears. She cries when she's sad, when she's happy, and even tears up when things just get to her.

She has special lacrimal glands to make new tears and special tubes, called lacrimal puncta, to drain old ones away. And she cries so much that she goes through ten ounces of tears per day, thirty gallons a year! In fact, if you look closely, you'll see that she's crying a little bit all the time.

The basal tears that Iris constantly produces form a thin coating of three layers that cover her and keep dirt and debris away. Right next to Iris is the mucus layer, which keeps the whole thing fastened to her. On top of it is the aqueous layer, which keeps Iris hydrated, repels invasive bacteria, and protects her skin, or cornea, from damage. And, finally, there is the lipid layer, an oily outer film that keeps the surface smooth for Iris to see through, and prevents the other layers from evaporating.

Normally, Iris goes about her day without really noticing the basal tears doing their thing. That's kind of their whole point. But one day, she meets a girl named Onion. Iris is immediately smitten. Onion looks gorgeous in her bright purple jacket, and she smells terrific. So, Iris invites Onion to her house for dinner. But when she comes in and takes off her jacket, something terrible happens.

You see, when Onion's jacket is removed, a chemical reaction happens, converting the sulfoxides that make her smell so great into sulfenic acid, which then becomes a nasty substance with a long name: syn-Propanethial S-oxide.

The gas stings Iris, and suddenly, she can't help it, she starts weeping uncontrollably. These reflex tears are different from the basal tears that Iris is used to. Because they're designed to wash away harmful substances, or particles, they're released in much larger amounts, and their aqueous layer contains more antibodies to stop any microorganisms that may be trying to get in, as well.

Both Iris and Onion are devastated. They know they can't continue their relationship if Iris is going to hurt and cry every time Onion takes off her jacket. So, they decide to break up. As Onion walks out the door, Iris stops crying. And immediately starts again.

Only now, she's not crying reflex tears but emotional tears. When someone is either too sad or too happy, it feels like a loss of control, which can be dangerous. So, emotional tears are sent in to stabilize the mood as quickly as possible, along with other physical reactions, such as an increased heart rate and slower breathing.

But scientists still aren't sure exactly how or why the tears themselves are helpful. They may be a social mechanism to elicit sympathy or show submission. But some studies have also found that emotional tears contain higher levels of stress hormones, such as ACTH and enkephalin, an endorphin and natural pain killer. In this case, emotional tears are also directly calming Iris down, as well as signaling her emotional state to others.

Sorry things didn't work out with Onion, Iris, but don't worry. As long as you have all three kinds of tears working to keep you balanced and healthy, it will get better. You'll see.