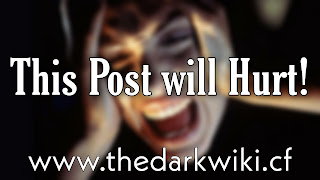 There's a study about different colors and how some cause headaches: these colors are too dangerous to see continuously at like the one added you see as background because they cause headaches.

The color on your screen is pressing on your cornea, stressing the nerves leading to your brain where, if the headache hasn't started already, it soon will as exposure causes headaches after only few seconds. Can you feel it? That pressure on your ears spreading to your now throbbing brain? Because... you shouldn't. The study is made up and there's no danger in the colors, but still some of you will have began to feel a headache.

Why? The nocebo effect. A nocebo is a harmless thing, like a normal color that causes harm, like a headache -- because you believe it's harmful.

That sounds like Voodoo, but there's science behind the nocebo effect, which is more than an irritating parlor trick, it causes real problems like in medicine.

When testing a new drug doctors get a group of sick people give half of them the new drug and give the other have a fake pill that does nothing, but which they're told is real. This is how science finds the stuff that works amongst the junk that doesn't.

But new drugs have side effects and sometimes patients drop out of the experiment because of them. No surprise there. But some people on the fake also drop out from the side effects. Side effects they've gotten from a drug they aren't taking. But because they think they're on the real thing, they've also thought themselves into the side effects.

Now maybe this is just a case of misattribution: people get headaches and, if they're joined a drug trial that lists headaches in the side effects, it's natural to blame the new drug and that certainly happens to some extent.

But the nocebo effect is more than just misattribution, it causes real, additional harm that scientists can measure in cruel, cruel experiments and this is one of the reasons there not an over abundance of research on nocoboes: approach your friendly neighborhood ethics board with an experiment designed to hurt people and they'll frown on that.

But sometimes nocebo experiments do get approved to the benefit of science and humanity, if not the participants. For example, under the right conditions some people who expect a harmless injection will give them a rash, will get a rash, but for people who expect nothing to happen, nothing is exactly what happens.

And fake pills can be additive. Take test subjects off pills they believe are addictive and some will experience nocebic withdrawal symptoms like pain and fatigue from the pills that they could never have been addicted to in the first place.

Another experiment gave people harmless injections, told half of them to just sit there and told the other half that their pain would increase for the next thirty minutes which it did.

But in this situation there is a drug that can block the nocebo effect and those who were told the injection would hurt, but were also secretly given the nocebo-blocking drug did not report an increase in pain, showing that the nocebo effect is a real, physical process.

In all these nocebo experiments it's the belief in harm that matters. If someone dressed as a voodoo witch doctor popped up and hexed you with a curse of great pain, no effect. But, in a room with a real doctor and his clipboard and a big science machine and a needle in your arm, you'll take his words rather more seriously. Which is why doctors say: "This won't hurt a bit" rather than "Oh this? It's going to hurt. Like a lot." which, by the way, was a real experiment done on women undergoing labor during spinal injections. Guess how that turned out?

But nocebos don't end here. While illnesses like the flu, spread from contact with germ-infected humans and the things they touch with their germy hands, a nocebo spreads from mind to mind, no contact required.

A notable example happened in a Tennessee high school. One teacher reported a strange smell in her classroom and developed symptoms of headache nausea, and difficulty breathing. These symptoms spread to some of her students and from them to others in the school. Almost two hundred people ended up at the local hospital but all medical tests came back with nothing, nor was anything harmful found at the school.

This was a nocebo, the belief that the air was making them sick, spread mind to mind. Everyone who got sick heard about the symptoms from someone else. When this happens, it's called mass psychogenic illness.

The treatment in these cases is to separate those with symptoms from the rest and reassure the ill that yes, their symptoms are real, but no, they haven't been exposed to anything toxic, and yes, people are getting better quickly. The last is one of the indicators that separates a real poison gas leak or biological weapon from mass psychogenic illness.

But the final factor, number of cases increasing with greater media coverage, can lead to this kind of thing spreading far and wide.

Take, electrosensitives: people who get nausea (among other things) from exposure to parts of the electromagnetic spectrum, notably WiFi the density of which is increasing over time, forcing particularly bad sufferers to retreat to places like the creepy-sounding radio science zone in West Virginia.

And if you make a group of people without electrosensitivity watch a news report on how Wifi makes you ill while another group watches something uninformative and afterward expose both groups to a fake Wifi signal, only some of those who watched the news report feel sick.

There's a similar phenomenon called 'wind farm disease' with similar side effects, which turns up where it's been talked about on the local news, but not in other places in the same country with the same wind farms where it isn't. All this makes it too easy to mock people for thinking they're getting sick from WiFi or Wind farms or Wind farms with WiFi.

But it's important to realize they're not crazy, the side effects are real, they're just wrong about the source. All evidence points to the belief in electrosensitivy as the cause of electrosensitivity. Which means the news reports talking about these illnesses are spreading a kind of mind virus.

And while these are exotic examples, there is also evidence that some allergies and asthma cases are nocebic and thus able to be spread in the same way.

Harmful things aren't harmful just because we believe they are. The right dose of arsenic will kill you as surely as an anvil to the head, no matter your insistence otherwise. But the nocebo effect does show that our beliefs about otherwise harmless things can make them harmful. Which means that our voodoo doctor's hex from before really could work, but only if you were foolish enough to believe him.

How does Artificial Intelligence learn?