What makes something "Kafkaesque"? 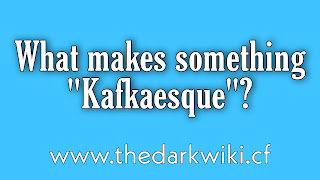 "Someone must have been telling lies about Josef K. He knew he had done nothing wrong, but one morning, he was arrested."

Thus begins "The Trial," one of author Franz Kafka's most well-known novels.  K, the protagonist, is arrested out of nowhere and made to go through a bewildering process where neither the cause of his arrest, nor the nature of the judicial proceedings are made clear to him. This sort of scenario is considered so characteristic of Kafka's work that scholars came up with a new word for it.

Kafkaesque has entered the vernacular to describe unnecessarily complicated and frustrating experiences, like being forced to navigate labyrinths of bureaucracy.

But does standing in a long line to fill out confusing paperwork really capture the richness of Kafka's vision? Beyond the word's casual use, what makes something Kafkaesque?

Franz Kafka's stories do indeed deal with many mundane and absurd aspects of modern bureaucracy, drawn in part from his experience of working as an insurance clerk in early 20th century Prague. Many of his protagonists are office workers compelled to struggle through a web of obstacles in order to achieve their goals, and often the whole ordeal turns out to be so disorienting and illogical that success becomes pointless in the first place.

For example, in the short story, "Poseidon," the Ancient Greek god is an executive so swamped with paperwork that he's never had time to explore his underwater domain. The joke here is that not even a god can handle the amount of paperwork demanded by the modern workplace. But the reason why is telling. He's unwilling to delegate any of the work because he deems everyone else unworthy of the task. Kafka's Poseidon is a prisoner of his own ego.

This simple story contains all of the elements that make for a truly Kafkaesque scenario. It's not the absurdity of bureaucracy alone, but the irony of the character's circular reasoning in reaction to it that is emblematic of Kafka's writing. His tragicomic stories act as a form of mythology for the modern industrial age, employing dream logic to explore the relationships between systems of arbitrary power and the individuals caught up in them.

When Gregor Samsa awaken's one morning to find himself transformed into a giant insect, his greatest worry is that he gets to work on time. Of course, this proves impossible.

It was not only the authoritarian realm of the workplace that inspired Kafka. Some of his protagonists' struggles come from within.

The short story, "A Hunger Artist," describes a circus performer whose act consists of extended fasts. He's upset that the circus master limits these to 40 days, believing this prevents him from achieving greatness in his art. But when his act loses popularity, he is left free to starve himself to death. The twist comes when he lays dying in anonymity, regretfully admitting that his art has always been a fraud. He fasted not through strength of will, but simply because he never found a food he liked.

Even in "The Trial," which seems to focus directly on bureaucracy, the vague laws and bewildering procedures point to something far more sinister: the terrible momentum of the legal system proves unstoppable, even by supposedly powerful officials. This is a system that doesn't serve justice, but whose sole function is to perpetuate itself.

What political theorist Hannah Arendt, writing years after Kafka's death, would call "tyranny without a tyrant." Yet accompanying the bleakness of Kafka's stories, there's a great deal of humor rooted in the nonsensical logic of the situations described.

So on the one hand, it's easy to recognize the Kafkaesque in today's world. We rely on increasingly convoluted systems of administration that have real consequences on every aspect of our lives. And we find our every word judged by people we can't see according to rules we don't know.

On the other hand, by fine-tuning our attention to the absurd, Kafka also reflects our shortcomings back at ourselves. In doing so, he reminds us that the world we live in is one we create, and have the power to change for the better.