How does caffeine keep us awake? 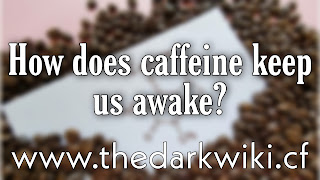 Over 100,000 metric tons of caffeine are consumed around the world every year. That's equivalent to the weight of 14 Eiffel Towers. Most of this caffeine is consumed in coffee and tea, but it's also ingested in some sodas, chocolate, caffeine pills, and even beverages labeled decaf.

Caffeine helps us feel alert, focused, happy, and energetic, even if we haven't had enough sleep. But it can also raise our blood pressure, and make us feel anxious. It's the world most widely used drug. So how does it keep us awake?

In the human body, caffeine acts as a stimulant for the central nervous system. It keeps us awake by blocking one of the body's key sleep-inducing molecules, a substance called adenosine.

Your body needs a constant supply of energy, which it gets by breaking down a high-energy molecule called ATP. In the process, it liberates adenosine, ATP's chemical backbone. Neurons in your brain have receptors perfectly tailored to this molecule.

When adenosine docks to these receptors, it activates a cascade of biochemical reactions that cause neurons to fire more sluggishly and slow the release of important brain-signaling molecules. In other words, you get sleepy.

To summarize, adenosine inhibits your neurons. Caffeine inhibits the inhibitor, so it stimulates you. Caffeine can also boost positive feelings. In some neurons, the adenosine receptors are linked to receptors for another molecule called dopamine.

One of dopamine's roles in the brain is to promote feelings of pleasure. When adenosine docks in one of these paired receptors, that can make it harder for dopamine to fit in its own spot, interrupting its mood-lifting work. But when caffeine takes adenosine's place, it doesn't have the same effect, and dopamine can slide in.

There's evidence that caffeine's effects on adenosine and dopamine receptors can have long-term benefits, too, reducing the risk of diseases like Parkinson's, Alzheimer's, and some types of cancer.

Caffeine can also ramp up the body's ability to burn fat. In fact, some sports organizations think that caffeine gives athletes an unfair advantage and have placed limits on its consumption. From 1972 until 2004, Olympic athletes had to stay below a certain blood-caffeine concentration to compete.

Of course, not all of caffeine's effects are so helpful. It might make you feel better and more alert, but it can also raise your heart rate and blood pressure, cause increased urination or diarrhea, and contribute to insomnia and anxiety.

Plus, the foods and beverages caffeine is found in have their own impacts on your body that have to be taken into account. Your brain can adapt to regular consumption of caffeine. If your adenosine receptors are perpetually clogged, your body will manufacture extra ones.

That way, even with caffeine around, adenosine can still do its job of signaling the brain to power down. That's why you may find you need to consume more and more caffeine to feel as alert. There are more and more adenosine receptors to block. It's also why if you suddenly quit caffeine, you may experience an unpleasant withdrawal.

With plenty of receptors and no competition, adenosine can work overtime, causing symptoms like headaches, tiredness, and depressed moods. But in a few days, the extra adenosine receptors will disappear, your body will readjust, and you'll feel just as alert as ever, even without an infusion of the world's most popular stimulant.