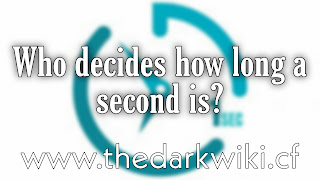 In 1967, researchers from around the world gathered to answer a long-running scientific question— just how long is a second? It might seem obvious at first. A second is the tick of a clock, the swing of a pendulum, the time it takes to count to one. But how precise are those measurements? What is that length based on? And how can we scientifically define this fundamental unit of time?

For most of human history, ancient civilizations measured time with unique calendars that tracked the steady march of the night sky. In fact, the second as we know it wasn’t introduced until the late 1500’s, when the Gregorian calendar began to spread across the globe alongside British colonialism.

The Gregorian calendar defined a day as a single revolution of the Earth about its axis. Each day could be divided into 24 hours, each hour into 60 minutes, and each minute into 60 seconds.

However, when it was first defined, the second was more of a mathematical idea than a useful unit of time. Measuring days and hours was sufficient for most tasks in pastoral communities.

It wasn’t until society became interconnected through fast-moving railways that cities needed to agree on exact timekeeping. By the 1950’s, numerous global systems required every second to be perfectly accounted for, with as much precision as possible.

And what could be more precise than the atomic scale? As early as 1955, researchers began to develop atomic clocks, which relied on the unchanging laws of physics to establish a new foundation for timekeeping.

An atom consists of negatively charged electrons orbiting a positively charged nucleus at a consistent frequency. The laws of quantum mechanics keep these electrons in place, but if you expose an atom to an electromagnetic field such as light or radio waves, you can slightly disturb an electron’s orientation. And if you briefly tweak an electron at just the right frequency, you can create a vibration that resembles a ticking pendulum.

Unlike regular pendulums that quickly lose energy, electrons can tick for centuries. To maintain consistency and make ticks easier to measure, researchers vaporize the atoms, converting them to a less interactive and volatile state.

But this process doesn’t slow down the atom’s remarkably fast ticking. Some atoms can oscillate over nine billion times per second, giving atomic clocks an unparalleled resolution for measuring time.

And since every atom of a given elemental isotope is identical, two researchers using the same element and the same electromagnetic wave should produce perfectly consistent clocks.

But before timekeeping could go fully atomic, countries had to decide which atom would work best. This was the discussion in 1967, at the Thirteenth General Conference of the International Committee for Weights and Measures.

There are 118 elements on the periodic table, each with their own unique properties. For this task, the researchers were looking for several things. The element needed to have long-lived and high frequency electron oscillation for precise, long-term timekeeping.

To easily track this oscillation, it also needed to have a reliably measurable quantum spin— meaning the orientation of the axis about which the electron rotates— as well as a simple energy level structure— meaning the active electrons are few and their state is simple to identify.

Finally, it needed to be easy to vaporize. The winning atom? Cesium-133. Cesium was already a popular element for atomic clock research, and by 1968, some cesium clocks were even commercially available.

All that was left was to determine how many ticks of a cesium atom were in a second. The conference used the most precise astronomical measurement of a second available at the time— beginning with the number of days in a year and dividing down.

When compared to the atom’s ticking rate, the results formally defined one second as exactly 9,192,631,770 ticks of a cesium-133 atom. Today, atomic clocks are used all over the Earth— and beyond it.

From radio signal transmitters to satellites for global positioning systems, these devices have been synchronized to help us maintain a globally consistent time— with precision that’s second to none.