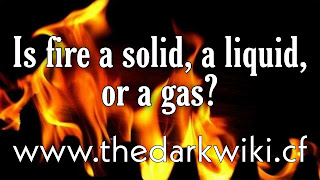 Sitting around a campfire, you can feel its heat, smell the woody smoke, and hear it crackle. If you get too close, it burns your eyes and stings your nostrils.

You could stare at the bright flames forever as they twist and flicker in endless incarnations. But what exactly are you looking at?

The flames are obviously not solid, nor are they liquid. Mingling with the air, they’re more like a gas, but more visible--and more fleeting.

And on a scientific level, fire differs from gas because gases can exist in the same state indefinitely while fires always burn out eventually.

One misconception is that fire is a plasma, the fourth state of matter in which atoms are stripped of their electrons. Like fire and unlike the other kinds of matter, plasmas don’t exist in a stable state on earth. They only form when gas is exposed to an electric field or superheated to temperatures of thousands or tens of thousands of degrees.

By contrast, fuels like wood and paper burn at a few hundred degrees —far below the threshold of what's usually considered a plasma. So if fire isn’t a solid, liquid, gas, or a plasma, what does that leave?

It turns out fire isn’t actually matter at all. Instead, it’s our sensory experience of a chemical reaction called combustion. In a way, fire is like the leaves changing color in fall, the smell of fruit as it ripens, or a firefly’s blinking light.

All of these are sensory clues that a chemical reaction is taking place. What differs about fire is that it engages a lot of our senses at the same time, creating the kind of vivid experience we expect to come from a physical thing. Combustion creates that sensory experience using fuel, heat, and oxygen.

In a campfire, when the logs are heated to their ignition temperature, the walls of their cells decompose, releasing sugars and other molecules into the air. These molecules then react with airborne oxygen to create carbon dioxide and water.

At the same time, any trapped water in the logs vaporizes, expands, ruptures the wood around it, and escapes with a satisfying crackle.

As the fire heats up, the carbon dioxide and water vapor created by combustion expand. Now that they’re less dense, they rise in a thinning column. Gravity causes this expansion and rising, which gives flames their characteristic taper. Without gravity, molecules don’t separate by density and the flames have a totally different shape.

We can see all of this because combustion also generates light. Molecules emit light when heated, and the color of the light depends on the temperature of the molecules. The hottest flames are white or blue. The type of molecules in a fire can also influence flame color.

For instance, any unreacted carbon atoms from the logs form little clumps of soot that rise into the flames and emit the yellow-orange light we associate with a campfire.

Substances like copper, calcium chloride, and potassium chloride can add their own characteristic hues to the mix. Besides colorful flames, fire also continues to generate heat as it burns. This heat sustains the flames by keeping the fuel at or above ignition temperature.

Eventually, though, even the hottest fires run out of fuel or oxygen. Then, those twisting flames give a final hiss and disappear with a wisp of smoke as if they were never there at all.