The science of smog 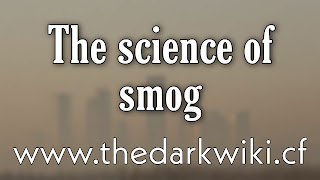 On July 26, 1943, Los Angeles was blanketed by a thick gas that stung people's eyes and blocked out the Sun. Panicked residents believed their city had been attacked using chemical warfare. But the cloud wasn't an act of war. It was smog.

A portmanteau of smoke and fog, the word "smog" was coined at the beginning of the 20th century to describe the thick gray haze that covered cities such as London, Glasgow, and Edinburgh.

This industrial smog was known to form when smoke from coal-burning home stoves and factories combined with moisture in the air. But the smog behind the LA panic was different. It was yellowish with a chemical odor.

Since the city didn't burn much coal, its cause would remain a mystery until a chemist named Arie Haagen-Smit identified two culprits: volatile organic compounds, or VOCs, and nitrogen oxides.

VOCs are compounds that easily become vapours and may contain elements, such as carbon, oxygen, hydrogen, chlorine, and sulfur. Some are naturally produced by plants and animals, but others come from manmade sources, like solvents, paints, glues, and petroleum.

PANs and ozone cause eye irritation and damage lung tissue. Both are key ingredients in photochemical smog, which is what had been plaguing LA. So why does smog affect some cities but not others? Both industrial and photochemical smog combine manmade pollution with local weather and geography. London's high humidity made it a prime location for industrial smog.

Photochemical smog is strongest in urban areas with calm winds and dry, warm, sunny weather. The ultraviolet radiation from sunlight provides the energy necessary to breakdown molecules that contribute to smog formation.

Cities surrounded by mountains, like LA, or lying in a basin, like Beijing, are also especially vulnerable to smog since there's nowhere for it to dissipate.

That's also partially due to a phenomenon known as temperature inversion, where instead of warm air continuously rising upward, a pollution-filled layer of air remains trapped near the Earth's surface by a slightly warmer layer above.

Smog isn't just an aesthetic eyesore. Both forms of smog irritate the eyes, nose, and throat, exacerbate conditions like asthma and emphysema, and increase the risk of respiratory infections like bronchitis.

Smog can be especially harmful to young children and older people and exposure in pregnant women has been linked to low birth weight and potential birth defects. Secondary pollutants found in photochemical smog can damage and weaken crops and decrease yield, making them more susceptible to insects.

Yet for decades, smog was seen as the inevitable price of civilization. Londoners had become accustomed to the notorious pea soup fog swirling over their streets until 1952, when the Great Smog of London shut down all transportation in the city for days and caused more than 4,000 respiratory deaths.

As a result, the Clean Air Act of 1956 banned burning coal in certain areas of the city, leading to a massive reduction in smog. Similarly, regulations on vehicle emissions and gas content in the US reduced the volatile compounds in the air and smog levels along with them.

Smog remains a major problem around the world. Countries like China and Poland that depend on coal for energy experience high levels of industrial smog. Photochemical smog and airborne particles from vehicle emissions affect many rapidly developing cities, from Mexico City and Santiago to New Delhi and Tehran.

Governments have tried many methods to tackle it, such as banning cars from driving for days at a time. As more than half of the world's population crowds into cities, considering a shift to mass transit and away from fossil fuels may allow us to breathe easier.