The science behind Rainbows! 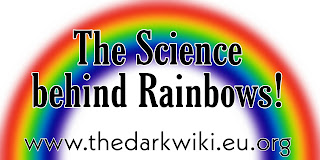 A few days ago, somebody asked me this question: "Has an end of a rainbow ever been found?" Now, at first I was like, the end of a rainbow? Of course you can't get there, everybody knows that.

But then I said, why? I mean, what would happen if I saw a rainbow and I fired a camera bullet at the rainbow? What would the footage look like? Well, I found that in this impossible journey to a rainbow, you can learn a lot.

For instance, the rainbow that you see is unique to you. That's right, anybody nearby will also see a rainbow, but their rainbow will be slightly different. There's a different rainbow for everybody, and that's because rainbows are apparent phenomenon. Where you are dictates where the rainbow will appear to you.

Rainbows happen because sunlight behind your body enters into raindrops in front of you that then reflect it back into your eyeballs, and there's a rainbow because raindrops not only reflect light, they also refract it.

Refraction occurs whenever any type of wave enters a new medium where its speed is changed. In order to change speed, that wave must change direction. So when white light from the sun enters a raindrop, it is refracted. It changes direction. And different wavelengths of white, which means different colors, are refracted differently. So they get separated into what we know as ROY G BIV.

The geometry of a spherical raindrop means that this spectrum of colors will only be visible to you from a very specific angle relative to where you are, and that angle is about 40 to 42 degrees from the angle of your head to your head's shadow.

Here is a way to think about it. The spectrum of a rainbow is firing out of raindrops between the angle of 40 and 42 degrees. So if you move forward, you'll just see that rainbow coming from different drops, except light that reflects more than one time inside the raindrop. Now, in order for this light to get to your eyes, it has to reflect at a very specific angle. So it's only visible about 50 to 53 degrees from your perspective, and this my friends, is the double rainbow. Now again, because of spherical geometry, these raindrops are not going to be able to reflect light to your eyeballs between 42 to 50 degrees, which means the area between a primary and secondary rainbow is darker than the rest of the sky. This area is known as Alexander's Dark Band.

Oh, and there's way more than we could ever cover here. For instance, if the sun is already set, but the moon is behind you producing enough light, you can get a moon bow. 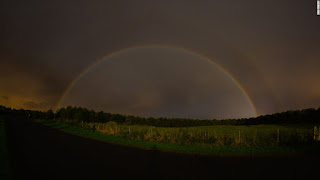 Also cool, reflection rainbows. If one of these occurs with a normal rainbow, you'll have two rainbows that don't line up, that aren't parallel. The reason is that one of these rainbows is not coming from sunlight behind the viewer, but instead from sunlight reflected from the lake below. 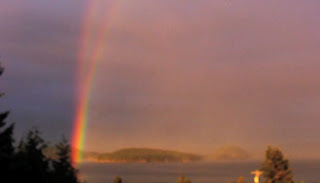 Because you can only see a rainbow from a certain angle, if you move your body, you will continue to see that rainbow from the same angle, which means the rainbow will move with you. It will appear to be following you. This is particularly apparent when you're flying in an airplane, high above the ground, moving quickly.

Now, because you're so far off the ground, the rainbow, which is centered around your shadow, is actually 100 percent completely visible, which means none of it is hiding below the horizon, which means you see a circular rainbow. And as you can see, as the plan flies through the clouds, the rainbow continues to be in the same apparent position. So if I fired a bullet camera right at a rainbow, the rainbow would not get closer; instead, it would appear to recede just as fast as the camera approached it.

Rainbow is a classic compound word, a word that is made up of two or more words that can stand on their own. So let's unpack these a bit beginning with bow. A decorative knot.

I have some brand new headphones. They're perfectly together, everything's fine, and they're perfectly straight. But quickly, after being in my pocket or in a backpack, headphones inevitably tie themselves up into weird knots. The same goes for Christmas tree lights and electrical wires. Why does that happen? I mean, are there some kind of like weird evil elf sneaking around when we're not looking tying wires into knots? Maybe, but probably not. The answer lies in mathematics.

Mathematicians have jiggled strings around inside boxes to determine not only what types of knots will randomly occur, but how often they will. And of course, what they found is that it's much more likely for a string to fall into a knotted position that a relatively rare unknotted one. Furthermore, once a string is knotted, it resists being untied, which is pretty much the definition of a knot. So it will remain knotted and twisted up until a person comes along and unties it.

But what about rain? Well, we know that rain is part of what's responsible for the visual experience of a rainbow, but what about the ole factory sensation of rain— the smell of rain. There's actually a name for the way rain smells. It's called petrichor. Naturalists have given the smell of rain a name because they have found a specific cause for the smell of rain. During dry times, plants exude in oil, and the point of this oil is to slow down seed germination and plant growth so they can wait until there's more water. But once the rain comes, this oil is washed into the air and we smell it, creating petrichor—the smell of rain. So the next time you smell rain, think about this word Petrichor and where it comes from. You're not just smelling nature or certain plant oils, you are smelling by definition the blood of stone, the blood of the earth, of the ground.