You Can't Touch Anything 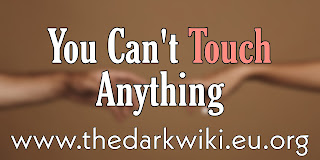 Today we're going to get close, like really close. In fact, I want to answer the question what's the closest we can get to other objects and other people? Now, it might sound like kind of a simple easy question, but when we get down to the atoms of it, it's quite complex and might leave you feeling a little bit alone.

When I touch my thumb with my index finger, my fingers, for all intents and purposes, are touching. But, at an atomic level, they're not. That's right, in fact, if you're sitting in a chair right now, your body is technically not touching the chair at all. Instead, you are hovering above the chair by some tiny, tiny atomically sized gap, something too small for us to even see, but it's there. And it's caused by the fact that your butt and the chair are made out of atoms.

Now, as we all know, the matter that we deal with every day is made out of atoms. And an atom is a nucleus surrounded by an outer shell of orbiting electrons. Now when two atoms get close to each other that aren't going to bond or chemically react, they have trouble touching each other. Why? Because electrons repel one another, because they have the same charge. And because of a fancy thing called the Pauli exclusion principle, we also know that all of an atoms electrons cannot all be pushed down to the same energy level all together on the same shell. So what this means is that if I touch something, I'm technically not really touching it. The atoms are getting quite close together, but the electromagnetic repulsion between electrons is saying "no closer".

Now, of course, the nerves in my skin can feel that repulsive force and that's what I call the texture or the feeling of the object. If I push hard enough of course, I can break or poke into or cut something, but I'm not touching any of its matter, I'm just pushing it out of the way using the electron-electron repulsion forces. Even though you can cut cark with scissors really easily, the scissors never touch the card.

This is where it gets depressing. What all of this means is that when you kissed your girlfriend or pet your dog or hug your grandmother, you're not actually making contact with their matter. You're not technically touching them, you're just feeling the repulsive force of their electrons. But maybe there's hope. Let's just avoid electrons altogether and ask ourselves what can we do to affect the nucleus of someone else's atoms? Maybe we can do that?

You're going to have to be a little bit radioactive if you're going to want to do this and luckily, people are a little bit radioactive. In fact, if you sleep in a bed with another person for an entire year, your body is actually exposed to one millirem more radiation than someone who sleeps alone. Now, we are talking about tiny, tiny amounts that really don't affect your body at all, but still, they are there. How did they get there? Well, carbon 14 is in the air, and potassium 40 is in bananas, that's right. Bananas have a really high potassium content. In fact, any food that has a lot of potassium in it, like Brazil nuts, is going to act the same way. All of that potassium is fine and dandy, but about one out of every 8,000 or so potassium atoms is a radioactive isotope of potassium. In fact, if you were to eat 600 bananas, it would be the equivalent of getting a chest x-ray.

Okay, cool, so I am a little bit radioactive. Does that mean that if I hug someone really close that some sort of radioactive ray might come out of my body and go into someone else's body and get absorbed into a nucleus of one of their atoms and then we could really finally say that we touched on a fundamental level? Maybe. The radiation that comes out of us is very unlikely to hit someone else's atoms and because people don't contain a lot of radioactive material in the bodies, that energy is just going to get absorbed and you're not going to really know that it happens and the chance, like I said, is super unlikely. So maybe we should go back a little bit and talk about chemical reactions.

Back when I mentioned that atoms have trouble touching, they are a little more friendly if they get together and, you know, share electrons. Now, this kind of stuff is happening all the time. When I eat food, my body is chemically reacting with that food to take out the nutrients, get rid of the stuff I don't want, but short of being a cannibal and eating someone's arm or being a zombie, how can I get chemically, reactionally close to a person? Well, luckily, there is a thing called birth. When you're growing inside your mother, your father and mother's DNA are all working together in chemical ways to create you. Because they're sharing electrons it seems at least more like a touch. I guess what I'm trying to say is that, in a way, your parents and your children are the only people you can know for certain you've come the closest to actually touching. And that's touching.